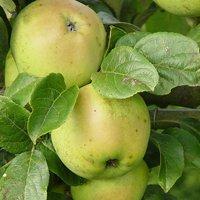 Arthur Turner does well as a fan or espalier tree and is an early cooking and baking variety suitable for colder areas.
£21.95
Add to cart

Espalier or fan trees are used against a wall; you will need not less than 180 x 180cm’s for a fan or espalier tree. Please note we do not supply ready trained trees; Arthur Turner is a young tree suitable for training yourself, in situ. Such trees usually settle to cropping within 2 or 3 seasons.

Arthur Turner is a good early cooker that excels for baking. It is very frost tolerant and has beautiful blossom. It originated in Berkshire in the early 1900’s.

Arthur Turner - Pollination: Pollination group is ‘B’ so choose any varieties in that group to partner. Here are some suggested varieties: