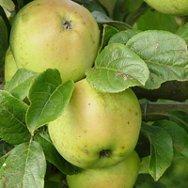 Arthur Turner is an early culinary variety ready for use from late August; very frost tolerant and excels for baking.
£21.95
Add to cart

This tree is grown on miniature M27 stock. M27 is a rootstock that produces the smallest tree of all; maturing to around 180cm’s in height and width, this Arthur Turner M27 tree is ideal for a container or small garden, courtyard or allotment. It should be staked if in a windy or open position. Crops can exceed 20ibs per tree when established and this rootstock is quite precocious, often yielding the year following planting.

Arthur Turner is a good early cooker that excels for baking. It is very frost tolerant and has beautiful blossom.

Arthur Turner - Pollination: Pollination group is ‘B’ so choose any varieties in that group to partner.