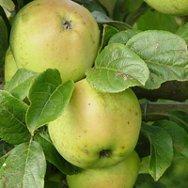 A great early cooker that is suitable for frosty areas and the north. Excels for baking.
£27.95
Add to cart

Stepover trees are used primarily for edging a border or pathway or to divide the kitche/vegetable garden. These very tiny trees are just 18” in height with two side laterals from the main stem forming a capital ‘T’ shape. The stepover tree is an ormamental addition to your garden and these trees are grown on the smallest avaailable rootstock, M27. Plant 120-150cm’s apart. Arthur Turner is a good early cooker that excels for baking. It is very frost tolerant and has beautiful blossom. It originated in Berkshire in the early 1900’s. Arthur Turner – Season: Early; harvest Arthur Turner from late August, the fruits can be used throughout September and can also be sliced and frozen. Arthur Turner – appearance: Medium-large pale green becoming slightly yellow; occassional pink blush on the sunny side. Arthur Turner apple trees – flavour: Slightly tart and robust at first mellows later and needs little sugar; excels for culinary use only. Uses: A cooking apple. Known as the perfect apple for baking, apple dumplings, and slicing and freezing. Makes a good apple sauce. Cropping & Growth A vigorous tree which can be container by the use of dwarfing rootstocks. Heavy and regular cropper. Generally healthy, can sometimes get mildew. Arthur Turner - Pollination: Pollination group is ‘B’ so choose any varieties in that group to partner. Here are some suggested varieties: James Grieve Redsleeves Greensleeves Grenadier Katy