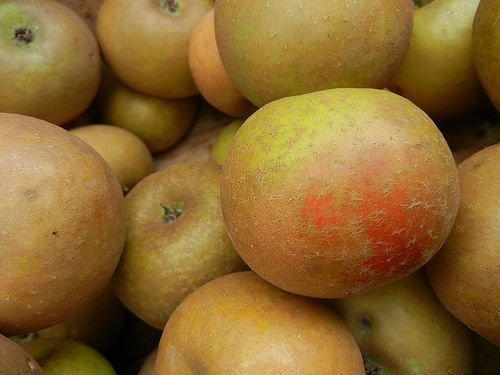 Ashmeads Kernel is a late storing variety with large and very richly flavoured russet fruits. Flowers late so suitable for the North.
£21.95
Add to cart

Espalier or fan trees are used against a wall; you will need not less than 180 x 180cm’s for a fan or espalier tree. Please note we do not supply ready trained trees; this Ashmeads Kernel is a young tree suitable for training yourself, in situ. Such trees usually settle to cropping within 2 or 3 seasons.

Ashmeads Kernel is a russet type apple with a superb flavour. A very old apple, thought to have been raised in the 1700’s, but did not achieve popularity until some 200 years later. Gloucestershire origin.

A very late variety. Harvest in November. Will store with ease until February or March.

Magnificent; rich and creamy with hints of spice and excellent aromatic qualitites. The sensational flavour makes up for erratic crops.

Dessert use. Also sliced and added to salads

Moderately vigorous and healthy; later flowering season makes it suitable for the North but cropping potential can be light.

Ashmeads Kernel - Pollination: Pollination group is ‘D’ so choose any varieties in that group to partner. Here are some suggested varieties: