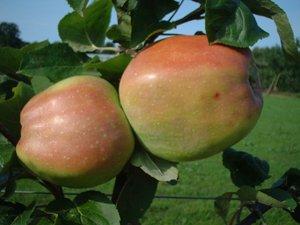 An interesting cooker with a history, vigorous and hardy tree.
£21.95
Add to cart

A culinary variety which dates from the 1600’s no less, and which was quite famous in the Midlands circa the 19th C. An unmistakeable variety.

Harvest Catshead in early October, the fruits will store in good condition until January.

Medium to large, blocky with slight protuberances on the upper side; viewed in profile it is possible to imagine the shape of a cats head. Bright green, yellowing slightly with age, onlt the occasional bronze flush.

Cooks to a not too wet puree. Flavour is good, fruity and powerful. Very good for dumplings, pies and sauces as well as freezing.

Catshead - Pollination: ‘B’ Pollination group, so use varieties with the same or adjacent pollinating prefixes. Good pollinators for this variety include: