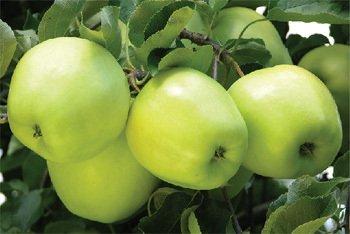 Cordon Apple trees are a good choice for restricted areas and a fence or wall. They can be grown at a 45degree angle, or upright. The rootstock we use for our cordon is M9 which is the best stock for cordon trees. Plant 60-80cm’s apart

Golden Delicious is an American apple, universally popular for nearly 200 years.  Needs a favourable aspect in this country to perform it’s true potential.

The longer it is left on the tree the better. Will store well into the new year and beyond.

Even, medium sized pure pale green to golden yellow throughout.

Moderate vigour, erratic cropper. Varieties such as ‘Greensleeves’ and ‘Limelight’ may be better garden alternatives with similar character.

Golden Delicious - Pollination: ‘B’ Pollination group, so use varieties with the same or adjacent pollinating prefixes. Some good suggested varieties are listed as follows: