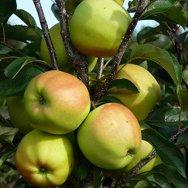 Ideal in a more favourable aspect for the fruits to ripen properly. Crisp, juicy, mild and sweet, an unmistakeable apple.
£21.95
Add to cart

This Golden Delicious apple tree is grown on miniature M27 stock. M27 is a rootstock that produces the smallest tree of all; maturing to around 180cm’s in height and width, this tree is ideal for a container or small garden, courtyard or allotment. It should be staked if in a windy or open position. Crops can exceed 20ibs per tree when established and this rootstock is quite precocious, often yielding the year following planting

Golden Delicious is an American apple, universally popular for nearly 200 years. Needs a favourable aspect in this country to perform it’s true potential.

The longer it is left on the tree the better. Will store well into the new year and beyond.

Even, medium sized pure pale green to golden yellow throughout.

Moderate vigour, erratic cropper. Varieties such as ‘Greensleeves’ and ‘Limelight’ may be better garden alternatives with similar character.