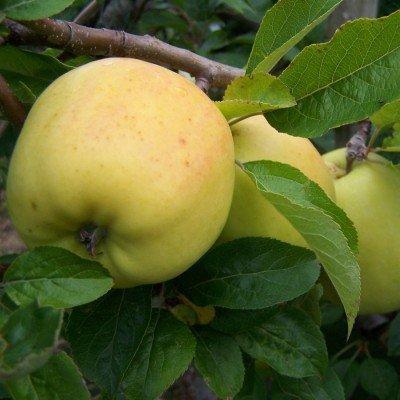 A culinary variety raised close to our Nursery in Norfolk and which has maintained a 'cult' following for many years. It's fruit may be used from early October, storing to January. Very good flavour; well worth trying.
£21.95
Add to cart

One of Norfolks most famous apples, but the origins of this culinary variety have been disputed as possibly being from Yorskhire before it’s 1820 introduction. It is a hardy grower that does well in colder areas.

Pick from the tree in early-mid Octrober; will store until January or longer. Can be enjoyed for dessert in Spring.

Mildly acidic for a cooker, sharp, but not as astringent as Bramley. Cooks to a rich creamy texture; valued for pies and baking, can be served with little sugar.

Predominantly a cooker but can be considered dual purpose.

Golden Noble - Pollination: ‘C’ Pollination group, so use varieties with the same or adjacent pollinating prefixes. Here are some suggested varieties: