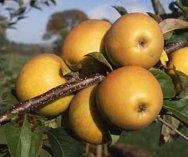 A particularly good garden apple variety as it is self fertile, the russet fruits have a magnificent flavour and can be enjoyed from October onwards, a recommended variety.
£21.95
Add to cart

This Herefordshire Russet apple tree is grown on miniature M27 stock. M27 is a rootstock that produces the smallest tree of all; maturing to around 180cm’s in height and width, this tree is ideal for a container or small garden, courtyard or allotment. It should be staked if in a windy or open position. Crops can exceed 20ibs per tree when established and this rootstock is quite precocious, often yielding the year following planting

Herefordshire Russet is a new variety to the range of russets with an exciting flavour that is proving to be an ideal garden variety.

Pick early October and enjoy until the new year.

Partly russetted in gold and cinnamon, but often not as heavily covered as some in this group. Cinnamon red blush may appear. Dense cream flesh.

Superb. Akin to a Cox with an intense, complex and aromatic flavour that is hugely enjoyable.

For use as a dessert apple.

Herefordshire Russet - Pollination: Partly self fertile so can be grown on it’s own. For full cropping potential this variety is in ‘B’ Pollination group, so use varieties with the same or adjacent pollinating prefixes.