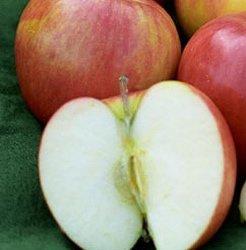 Jonagold has a wonderfully satisfying crispy bite and a nicely balanced flavour. It crops heavily and is vigorous and hardily productive. For Oct-January use.
£21.95
Add to cart

Cordon Apple trees are a good choice for restricted areas and a fence or wall. They can be grown at a 45degree angle, or upright. The rootstock we use for our cordon Jonagold is M9 which is the best stock for cordon trees. Plant 60-80cm’s apart.

Jonagold is a very important variety commercially, and one of the better supermarket apples. Raised in the U.S.A in 1968 from a Jonathan x Golden Delicious cross. It soon spread globally and is grown all over Europe and has received an Award of Garden Merit from the R.H.S.

At it’s best an attractive apple, although colouring can be variable. Pale green yellow, an oval apple variably covered by a bright orange red flush. Flesh is very crisp and cream.

Firm and juicy with a wonderful crispy bite. Plenty oif juice, plenty of sugar but with a satisfying light underlying acidity to give it balance. Very enjoyable to eat.

Jonagold - Pollination: This is a triploid variety that ideally needs two others to pollinate and yield fully. Here are some suggested varieties: