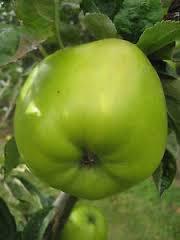 A popular cooking apple tree that is suitable for colder areas and quite frost tolerant.

The medium-large fruits are mostly pale shiny green with the occasional pink blush. Very good flavour, will store until into December.
£21.95
Add to cart

Cordon Apple trees are a good choice for restricted areas and a fence or wall. They can be grown at a 45degree angle, or upright. The rootstock we use for our cordon Lord Derby is M9 which is the best stock for cordon trees. Plant 60-80cm’s apart.

Lord Derby: This famous cooker came from Cheshire in 1862 and is believed to be a Catshead seedling.

Tatse is variable, although always good. Early in the season, and throughout the season when grown in the North, it is quite sharp and needs some sugar. But when stored, or grown in the south it is usually sweeter. Will keep some texture when cooked and much favoured for pies.

Lord Derby - Pollination: ‘C’ pollination group, use varieties with the same or adjacent groups to pollinate successfully.  Heare are some suggested varieties: