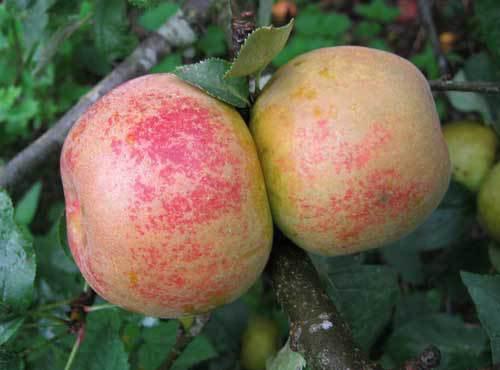 Superbly flavoured, rich and aromatic. Season October to late December; a partly russetted apple from France that has captivated for centuries.
£21.95
Add to cart

Espalier or fan trees are used against a wall; you will need not less than 180 x 180cm’s for a fan or espalier tree. Please note we do not supply ready trained trees; this Orleans Reinette is a young tree suitable for training yourself, in situ. Such trees usually settle to cropping within 2 or 3 seasons.

Orelans Reinette is an esteemed French variety from the 1700’s which remains highly regarded for it’s flavour.

For use early November to late December.

Outstanding, especially when grown in sunny spot. The deep cream flesh is akin to that of a russet – not overly juicy, firm, slightly crumbly and with a rich, complex aromatic flavour that is very more-ish.

Although a very fine dessert apple, also suits cooking having been recommended for tarts, pastries and slicing.

Orleans Reinette - Pollination: ‘D’ pollination group, use varieties with the same or adjacent groups to pollinate successfully.  Here are some suggested varieties: