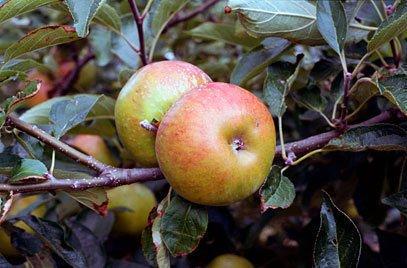 Pixie is a  variety has a committed following as it has a very good flavour and  is easier to grow well. The fruits are small to medium in size, the growth of the tree is normal. Will store.
£21.95
Add to cart

Cordon Apple trees are a good choice for restricted areas and a fence or wall. They can be grown at a 45degree angle, or upright. The rootstock we use for our cordon Pixie apple tree is M9 which is the best stock for cordon trees. Plant 60-80cm’s apart.

Selected at RHS Gardens Wisley in 1947, probably a Cox’s or Sunset seedling and considered superior to either parent. The name refers to the size of the apples, which are small, not the growth.

Cox-like with red flush and stripes over a green background.

Intensely aromatic and rich, firmer texture than a Cox..

Pixie - Pollination: ‘C’ pollination group, use varieties with the same or adjacent groups to pollinate successfully. Here are some suggested varieties: