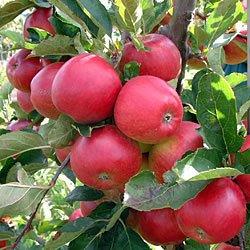 A recent introduction which is a cross of James Grieve x Golden Delicious. One of th very best garden apple trees which has quickly established itself and is now our top-selling variety. It has everything; flavour, appearance, storing qualities, texture, reliability and disease resistance. Oh – and it’s self fertile too!

Pick early October, will store until December with little loss of texture.

A handsome apple, the green-yellow base colour hardly visible beneath a dense covering of vibrant red.

Red Falstaff - Pollination: Self fertile so needs no pollinating partners itself. Red Falstaff is in pollination group ‘B’ so will pollinate varieties in the same or adjacent groups.

M9 is classed as dwarfing and a good intermediate stock. Matures to 200cm’s plus with a similar spread. M9 is heavy cropping and promotes larger fruits, but needs permanent staking and good soil.