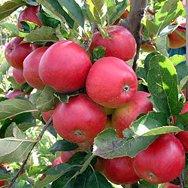 Quite simply the best garden apple by far - it has everything. Abundant crops, good flavour, healthy disease resistance and frost hardy blossom. It is self polinating so does not need other varieties to pollinate.
£27.95
Add to cart

Stepover trees are used primarily for edging a border or pathway or to divide the kitche/vegetable garden. These very tiny trees are just 18” in height with two side laterals from the main stem forming a capital ‘T’ shape. The stepover tree is an ormamental addition to your garden and these trees are grown on the smallest avaailable rootstock, M27. Plant 120-150cm’s apart. Red Falstaff is a recent introduction which is a cross of James Grieve x Golden Delicious. One of th very best garden apple trees which has quickly established itself and is now our top-selling variety. It has everything; flavour, appearance, storing qualities, texture, reliability and disease resistance. Oh – and it’s self fertile too! Red Falstaff Apple tree – Season: Pick early October, will store until December with little loss of texture. Red Falstaff - appearance: A handsome apple, the green-yellow base colour hardly visible beneath a dense covering of vibrant red. Red Falstaff apple trees – flavour: Braeburn style but better. Dense, crunchy, juicy, sweet but not excessively so. Maintains it’s texture very well. Uses: A dessert apple. Cropping & Growth Medium growth, hardy and disease free. Heavy cropper. Red Falstaff - Pollination: Self fertile so needs no pollinating partners itself. Red Falstaff is in pollination group ‘B’ so will pollinate varieties in the same or adjacent groups.