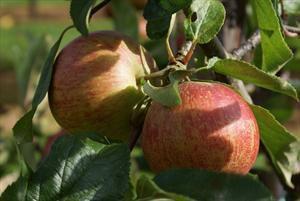 A variety steadily rising in popularity owing to it's sumptuous flavour. Swiss raised so is hardy, stores until January.

A modern apple from Switzerland which has a deserved fan-following for it’s excellent flavour.

Pick from the tree in late September and stores until the New Year.

Usually quite brightly coloured with a handsome red flush over green-yellow.

For dessert use primarily.

Moderately vigorous and cold hardy; can be slow to get going.

Rubinette - Pollination: Pollination group ‘B’ so pollinate with varieties in the same or adjacent groups. Here are some suggested varieties: