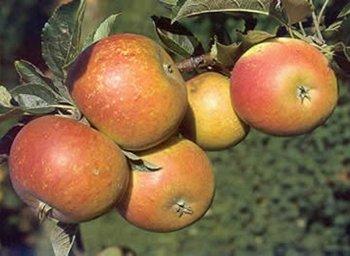 A recent form of Cox's Orange, virtually identical other than the flowers which are self pollinating ensuring a good crop from this variety when grown on it's own.
£27.95
Add to cart

Self fertile Cox’s Apple Trees for sale A new form of Cox’s Orange which is a cleaner easier to grow tree and which hasself fertile blossom. A useful addition to the range of apple tree varieties suited to the one-tree garden. Self fertile Cox’s apple tree – Season: A similar season to Cox’s; harvest late September onward and usually keeps into January. Self fertile Cox’s – appearance: Medium sized pale green with broken orange red stripes and flush. Self fertile Cox’s apple trees – flavour: The intense sweet-sharp, aromatic taste of a true Cox. Uses: A dessert apple and also for slicing. Cropping & Growth Medium growth habit, slightly spreading. Self fertile Cox's - Pollination: Self fertile Cox is self fertile so does not need to be aprtnered with another tree to achieve cropping potential. It is itself in group ‘B’ for pollination so can be used in conjunction with varieties in the same or adjacent groups. Tree sizes for Self Fertile Cox’s M27 is a miniature stock, ideal for very small gardens, pots on the patio etc. Grows to around 180cm’s. Good hearty soil is preferred. M9 is classed as dwarfing and a good intermediate stock. Matures to 200cm’s plus with a similar spread. M9 is heavy cropping and promotes larger fruits, but needs permanent staking and good soil. M26 stock Is classed as semi-dwarfing. Does well on poorer soil. Reaches 300cm’s+ with the same spread. MM106 is vigorous and the best choice for where a larger ‘orchard sized’ tree is required. Grows 4m+ with the same spread and suitable for most soils.