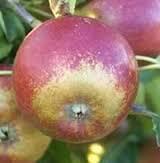 From a Cross between Laxtons Superb and Cox's Orange, both of which have superb flavours, Tydemans Late Orange has combined the best attributes of both parents.

Harvest from the tree late and enjoy from storage.
£25.95
Add to cart

Stepover trees are used primarily for edging a border or pathway or to divide the kitchen/vegetable garden. These very tiny trees are just 18” in height with two side laterals from the main stem forming a capital ‘T’ shape. The stepover tree is an ormamental addition to your garden and these trees are grown on the smallest avaailable rootstock, M27. Plant 120-150cm’s apart.